One of the more well-known behavioral biases is loss aversion. Loss aversion is a common trait people display where they feel the pain of losing money much more acutely than the pleasure from gains. Cold-blooded logic would dictate that the rational investor should treat $100 lost the same as $100 won—after all, it’s $100 either way. However, loss aversion theorizes that the regret and anger of carelessly having $100 fall out of your pocket far outweighs the joy of finding $100 on the sidewalk.

Loss aversion is not hard to identify—you’ve probably seen it in your clients. How many of your clients bailed out of their long-term plan during the GFC of 2007-09?  Moreover, how many of them were so scared of the market that they waited years to get back in?  Maybe you even have clients that are still on the sidelines and have consequently missed the second-biggest bull market in U.S. history.

Teachable moment: When clients begin to display concerns about the market either due to volatility or other news, use it as an opportunity educate and manage emotions:

While there are many ways to illustrate loss aversion, one of the most famous case studies is Nobel Prize recipient Daniel Kahneman’s coin-flip scenario[1]. In this simple example, subjects were asked how much they would need to win on a simple 50-50 coin toss if they stood to lose $10 by guessing wrong. The average answer was a prize of $20, suggesting gains had to be twice as large to offset the potential psychological trauma of losses.

If one were to ask a computer the same question, the answer would likely be different—a win of $10.01 should be all that would be required in order to make this a profitable wager. However, the whole point of behavioral finance is that investors have emotions and don’t think like computers.

Many investors will want to think they won’t make emotional decisions when the markets are volatile or in a downward spiral. While the stress these market events can cause is normal, the decisions that come out of it can be disastrous for financial plans.

Along with explaining what loss aversion is, try enacting the coin flip scenario with clients. You can find out more about their risk averse mindset and use it a teaching moment.

Behavioral finance topics are often assumed to be in direct conflict with efficient market theories. Investment choices are thought of as a mental tug-of-war, where the rational side of the brain is telling the investor to do one thing while the emotional side is telling him or her to do the exact opposite.

However, having a hostility to losses actually makes a lot of sense no matter how one chooses to look at it. A mathematical truth is that the larger the losses one incurs, the greater the gains required to recover from those losses. 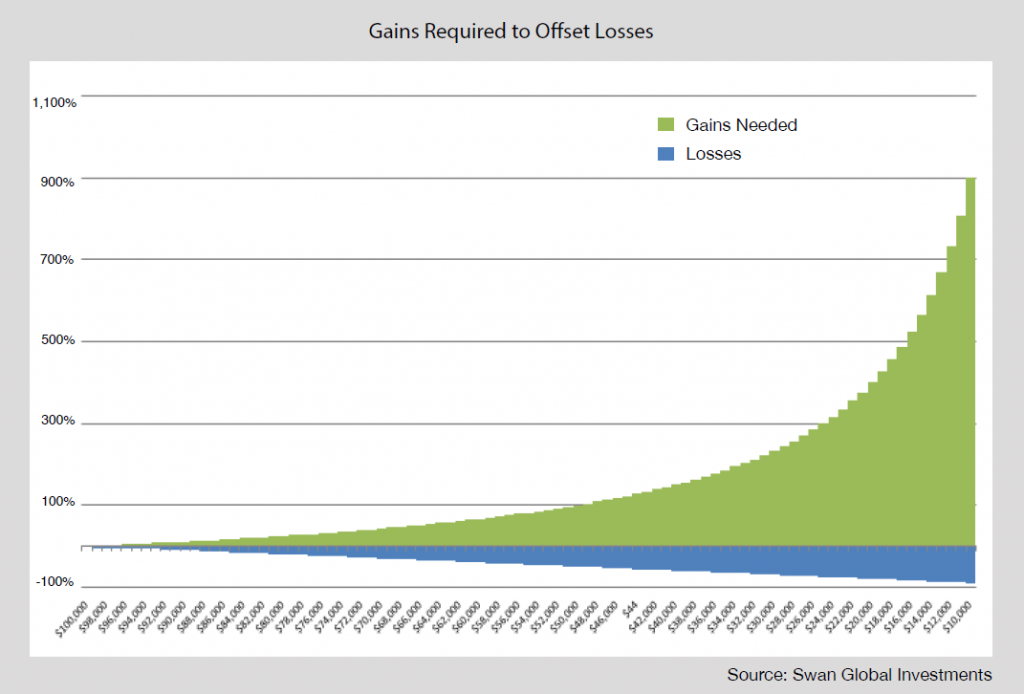 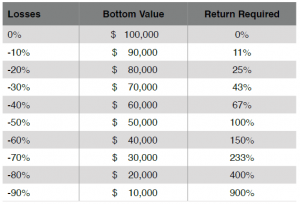 While losses increase in a straight, linear fashion, the gains needed to recover from those losses do not; they grow at a compounding rate. The deeper the hole, the more difficult it is to work your way out of it.

The 24-hour news cycle and fixation on recent returns and performance can exacerbate loss aversion. The constant updates of any market move or the way talking heads discuss volatile moments can whiplash investors from bull market participation to bear market preparation.

When a bear market does occur, the panic in the media can emotionally propel investors to push the sell button in an instant as they try to stop the pain as quickly as possible.

Another way the industry exacerbates loss aversion is failing to provide real investment solutions that seek to minimize losses. In previous bear markets, traditional strategies did a poor job minimizing losses for investors, so it’s no surprise that many bailed out of their financial plans during those turbulent times.

If loss aversion is a legitimate concept from both a behavioral and a mathematical perspective, how should one invest? Obviously, the answer is to invest in a way that minimizes losses. This is easier said than done.

Diversification has long been the standard strategy used to minimize losses. However, during the major market sell-offs of 2000-02 and 2007-09 many diversified investors still experienced painful levels of losses. Diversification alone was not enough to minimize the damage in a full-on bear market.

Moreover, most diversified portfolios rely heavily on fixed income to play the capital preservation role in a portfolio. There is no disputing that bonds have had a fantastic run since 1982. However, there are serious doubts whether or not bonds can provide the same level of return and risk mitigation going forward.

Instead, hedging and/or options-based strategies are potential alternatives for investors looking for uncorrelated assets that seek to avoid losing big. A hedged equity strategy like the Defined Risk Strategy is designed to stay invested in the markets while hedging the impact of catastrophic drawdowns on a portfolio. We do this through the active use of put options. Although put options are a drag on performance during up markets, we accept the trade-off due to the defensive role put options bring to a portfolio.

Like many investors, we feel the pain of losses much more acutely than joy when the market is setting all-time highs. You can learn more about investment philosophy here.

Keep Calm and Hedge What comes to mind when you hear the word “hedge”? Hedge funds? Scandals? High risk? Leverage? Fraud? Hedging gets a bad rap. When the market is volatile, hedging can be a valuable tool for investors to manage risk in their portfolios and help manage their emotions.
Pain Index - Better Measure of Risk At Swan Global Investments, we use the Pain Index to measure risk. We're seeking to redefine the conversation about risk to better align with how investors think about risk. The industry uses standard deviation to measure risk. But investors don't care about upside deviation, they care about avoiding the pain of losing money.

All Swan products utilize the Defined Risk Strategy (“DRS”), but may vary by asset class, regulatory offering type, etc. Accordingly, all Swan DRS product offerings will have different performance results due to offering differences and comparing results among the Swan products and composites may be of limited use. All data used herein; including the statistical information, verification and performance reports are available upon request. The S&P 500 Index is a market cap weighted index of 500 widely held stocks often used as a proxy for the overall U.S. equity market. Indexes are unmanaged and have no fees or expenses. An investment cannot be made directly in an index. Swan’s investments may consist of securities which vary significantly from those in the benchmark indexes listed above and performance calculation methods may not be entirely comparable. Accordingly, comparing results shown to those of such indexes may be of limited use. The adviser’s dependence on its DRS process and judgments about the attractiveness, value and potential appreciation of particular ETFs and options in which the adviser invests or writes may prove to be incorrect and may not produce the desired results. There is no guarantee any investment or the DRS will meet its objectives. All investments involve the risk of potential investment losses as well as the potential for investment gains. Prior performance is not a guarantee of future results and there can be no assurance, and investors should not assume, that future performance will be comparable to past performance. All investment strategies have the potential for profit or loss. Further information is available upon request by contacting the company directly at 970-382-8901 or www.swanglobalinvestments.com. 469-SGI-121819