Where the DRS Fits: The DRS as a Systematic Withdrawal Solution

In a previous blog post, we compared the risk-return characteristics of the Swan Defined Risk Strategy (DRS) against traditional and alternative bond strategies. The idea was to illustrate how the DRS, with its focus on capital preservation, has performance metrics similar to the multi-sector and non-traditional bond funds that have been making their way into institutional portfolios.

But beyond capital preservation, bonds have traditionally served as an income producer.  Since the Financial Crisis, it has been the lack of yield in traditional fixed income that drove many institutional investors to multi-sector and non-traditional bonds in the first place.

The low-yield environment was spawned by a “new normal” of worldwide monetary policy focused on stimulating with ultra-low or even negative interest rates and massive liquidity injections into the financial system. Consequently, bonds will be hard pressed to provide the same return streams going forward as they have over the past 35+ years.

In this new yield-starved investment landscape, investment committees and consultants are forced to reconsider how to generate the necessary yield and overall portfolio returns to sustain spending policies and/or meet long-term obligations.

Systematic withdrawals are an option, provided the investment being drawn down, and the portoflio overall, minimizes exposure to major losses in bear markets, as explained in our post “Suffering from Withdrawals.”

However, an investment strategy that can minimize large losses and generate consistent returns over market cycles may sustain systematic withdrawals.  While some may also struggle with the notion of actively withdrawing funds versus clipping a coupon, the reality of our low-yield environment is necessitating a change in perceptions for how to generate sustainable portfolio cash-flow.

How Does the Swan DRS Perform as a Systematic Withdrawal Solution?

Because the DRS has historically been limited to single-digit losses in its worst years and has had meaningful participation in up markets, one could make the case it fulfills the role of a distribution vehicle in a portfolio.

To be clear, the DRS does not generate yield like a traditional bond fund with a monthly distribution. Instead, the DRS can be used within a systematic withdrawal plan.

Historically, one could have safely liquidated a percentage of their DRS holdings to generate cash and yet not endanger principal. In fact, if someone implemented a systematic withdrawal plan with the DRS at its inception, the principal value of a DRS investment still grew.

Let us walk through a simple, hypothetical scenario:

How Do the Three Compare?

The final graph below compares the account value of these three options against each other. 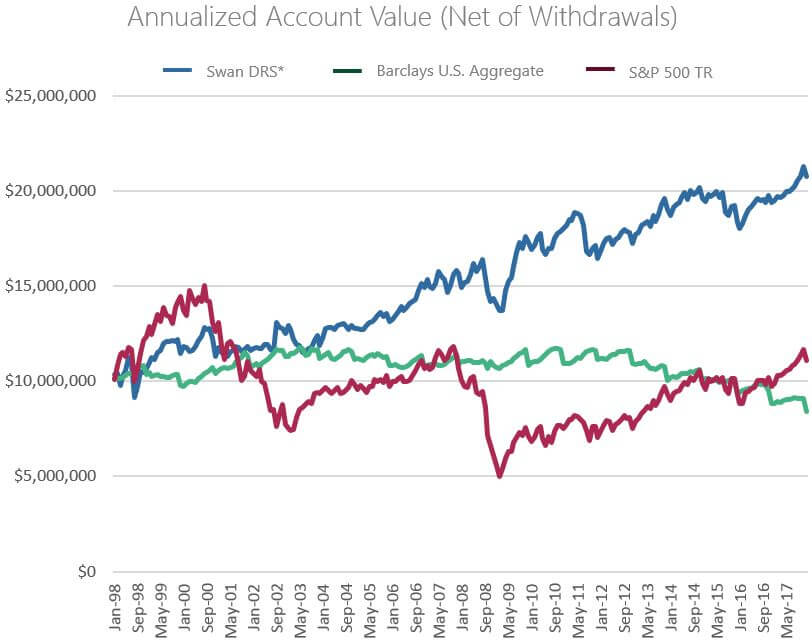 Indices are unmanaged and cannot be invested into directly. Past performance is no guarantee of future results. DRS results are from the Select Composite, net of fees, as of 12/31/2018. The charts and graphs contained herein should not serve as the sole determining factor for making investment decisions.

The Swan DRS can serve various roles in a portfolio. Over a series of posts, we have made the case for how our unique investment approach can serve can serve as a core equity growth role, a distribution vehicle via systematic withdrawals, even a multi-asset, globally diversified hedged portfolio.

The Defined Risk Strategy was built around the principles outlined by Micah Wakefield in his white paper “Math Matters.”  In this paper, Micah identifies four key factors to an investor’s success:

It is our belief that by building a strategy around these four key concepts not only improves returns but also, ultimately, grows wealth and can sustain distributions.

The State of Fixed Income

"Irrational Exuberance” Revisted We revisit the 12 factors Schiller identified in the first edition of his book, Irrational Exuberance, to examine which factors are still relevant to today’s markets and discuss some new factors not in play 22 years ago that investors need to consider.
Three Common Missteps to Avoid with Options-Based Strategies To better inform due diligence and strategy/manager selection, we explore a few “common threads” or themes around the 'missteps' of options-based strategies that blew up spectacularly over the last few decades to define what to avoid and questions to ask of managers.
Know What You Own To better inform due diligence and strategy/manager selection, we examine the different objectives and methodologies of various options-based strategies, as well as, analyze synthetics to offer a deeper understanding of an option strategy's risk/return profile.
New Risk Metrics for a New World Demand for alternative investments with low correlations grew after the 2007-09 financial crisis. We suggest and examine a new set of risk/return metrics that better measure the effectiveness of these new alternative strategies than traditional metrics
The Bleak Future of Bonds For decades bonds have played a dual role in most investor portfolios: providing income and capital preservation. Going forward, however, there are numerous risks working against bonds that pose tremendous challenges to their traditional roles of income and capital preservation and their reputation of being safe investments.
Learning from the Mistakes of Others Failed options-based strategies share three missteps: excessive leverage, lack of liquidity, and inadequate risk controls. Examining these will guide due diligence meetings when considering to incorporate an options strategy into portfolios.

Swan Global Investments, LLC is a SEC registered Investment Advisor that specializes in managing money using the proprietary Defined Risk Strategy (“DRS”). SEC registration does not denote any special training or qualification conferred by the SEC. Swan Global Investments offers and manages the Defined Risk Strategy for investors including individuals, institutions and other investment advisor firms. All Swan products utilize the Swan DRS but may vary by asset class, regulatory offering type, etc. Accordingly, all Swan DRS  product  offerings  will  have  different  performance  results  and  comparing  results among the Swan products and composites may be of limited use. Indices are unmanaged and cannot be invested into directly.  Past performance is no guarantee of future results.  DRS results are from the Select Composite, net of fees, as of 12/31/2016. The charts and graphs contained herein should not serve as the sole determining factor for making investment decisions. Hypothetical performance analysis is not actual performance history. Actual results may materially vary and differ significantly from the suggested hypothetical analysis performance data. This analysis is not a guarantee or indication of future performance. Swan claims compliance with the Global Investment Performance Standards (GIPS®). Any historical numbers, awards and recognitions presented are based on the performance of a (GIPS®) composite, Swan’s DRS Select Composite, which includes nonqualified discretionary accounts invested in since inception, July 1997 and are net of fees and expenses. All data used herein; including the statistical information, verification and performance reports are available upon request.

The benchmarks used for the DRS Select Composite are the S&P 500 Index, which consists of approximately 500 large cap stocks often used as a proxy for the overall U.S. equity market, and a 60/40 blended composite, weighted 60% in the aforementioned S&P 500 Index and 40% in the Barclays US Aggregate Bond Index. The 60/40 is rebalanced monthly. The Barclays US Aggregate Bond Index is a broad-based flagship benchmark that measures the investment grade, US dollar-denominated, fixed-rate taxable bond market. The index includes Treasuries, government-related and corporate securities, MBS (agency fixed-rate and hybrid ARM pass-throughs), ABS and CMBS (agency and non-agency). Indexes are unmanaged and have no fees or expenses. An investment cannot be made directly in an index. Swan’s investments may consist of securities which vary significantly from those in the benchmark indexes listed above and performance calculation methods may not be entirely comparable. Accordingly, comparing results shown to those of such indexes may be of limited use.

The advisor’s dependence on its DRS process and judgments about the attractiveness, value and potential appreciation of particular ETFs and options in which the advisor invests or writes may prove to be incorrect and may not produce the desired results. There is no guarantee any investment or the DRS will meet its objectives. All investments involve the risk of potential investment losses as well as the potential for investment gains. Prior performance is not a guarantee of future results and there can be no assurance, and investors should not assume, that future performance will be comparable to past performance. Further information is available upon request by contacting the company directly at 970.382.8901 or visit www.swanglobalinvestments.com. 045-SGI-012819