Unlocking the Power of LEAPS

A long-term equity anticipation security are options with expiration dates longer than 12 months. A LEAPS put option can be used as a long-term hedge, offering risk mitigation for a longer time horizon without capping potential upside.

An investment approach that utilizes a LEAPs put option as a long-term hedge, like the Defined Risk Strategy (DRS), has three distinct benefits for long-term investors.

Because it has a one to two-year expiration, it may provide investors the defense they need before, during, and after a bear market (defined as a decline of 20% or more from market highs). Historically, the impacts of bear markets can last anywhere from 1 to 2 years, so having a defense mechanism that investors can count on throughout the bear market is crucial for keeping them invested.

While no two bear markets are the same, they are always damaging to portfolios and investor psyches. The nature of the bear market, whether structural, cyclical, or event-driven, has historically made a difference in the speed, magnitude, and duration of the market selloff and recovery.

In contrast, short-term put options (less than a year for expiration) to hedge a portfolio may leave investors unhedged when they need it most. As a bear market ravages investors’ portfolios, a short-term put option may expire worthless.  Subsequently, if a short-term hedge expires or is exercised during a bear market, it may become too expensive to hedge again with a new put option (like buying fire insurance after the fire has begun), and in such cases investors may be left to face the full brunt of further declines without protection.

A long-term put option doesn’t put investors in a scenario where they are forced to rehedge under duress when it may not financially make sense.  Instead a long-term hedge provides investors with a reliable way to mitigate losses during lengthier bear market selloffs, therefore helping clients remain calm and avoid emotional reactions.

A LEAPS put option is inversely correlated to the underlying equity investment, meaning it gains value when the equity market loses value. The more the market falls below the initial hedge level (strike price), the more valuable the put option becomes. As the put option gains value it essentially offsets additional losses in the portfolio.

It is important to note, this inverse relationship is not linear. As the market sells off, the value of the hedge intensifies, or accelerates; what may start off as a partial offset of losses becomes a dollar-for-dollar offset, and, eventually, the hedge increases more in value than the market declines.

At this point, selling the valuable put option makes sense. It results in a profit that can be used to

LEAPS offer the opportunity for investors to “buy low, sell high.” A huge benefit to selling a valuable put option during a market sell-off is creating the cash necessary to take advantage of a bear market: buying additional equity at a significantly reduced price.

Investors often don’t have the financial or emotional wherewithal to buy when the markets are in a nosedive.

Rehedging a LEAPS put option provides this opportunity. Selling a hedge that has become highly valuable during a major selloff creates the investable capital when the investor doesn’t usually have the cash or emotional discipline to buy low. This process of actively managing (re-hedging) the long-term hedge, does not require the investor to add more of their own money, yet creates extra capital to be put to work after the market has provided long-term investors a buying opportunity.

The additional benefit to this, is the springboard effect for investors’ portfolios when recovery eventually occurs. Purchasing additional shares in a market selloff lowers their cost basis and may position investors for a better rebound and faster recovery when the markets turn.

The Swan Defined Risk Strategy (DRS), is a hedged equity investment strategy launched in 1997. The DRS was able to unlock the benefits of the LEAPS put option during the Global Financial Crisis. This bear market provided an opportunity to re-hedge twice and serves as an example of the tremendous benefits of actively managing long-term hedging for long-term investors.

Below is a chart of 2008 and the trajectory of the market crisis alongside the treatment of the LEAPS hedge. 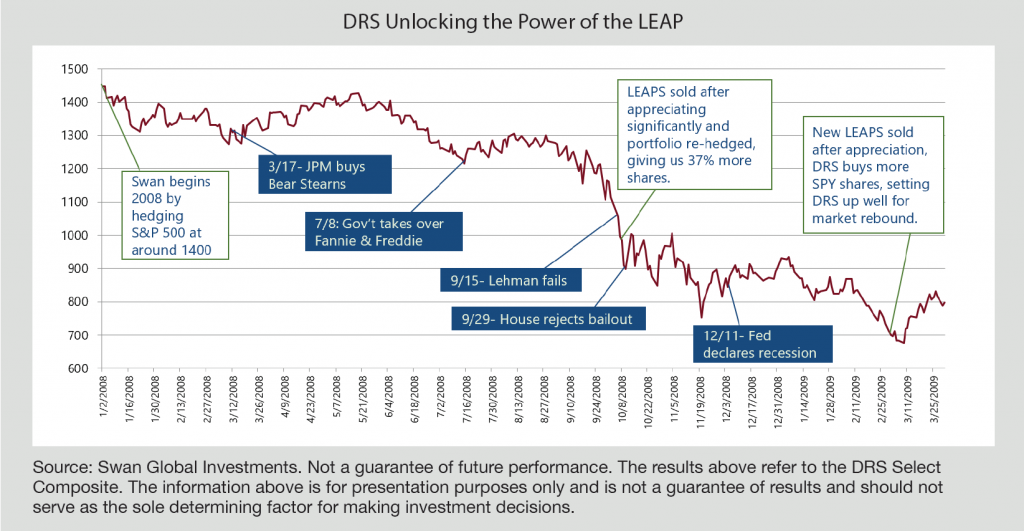 We hedged the S&P 500 around 1400 at the beginning of 2008. As the year went on and the market went down, our LEAPS put option continued to gain in value.

In between September 15 when Lehman fails and September 29 when the house rejects a bailout, we sold the LEAPS put option, set a new hedge, and purchased additional shares, resulting in ~37% more shares for investors.

By unlocking the power of the re-hedge twice in the selloff during the Great Financial Crisis, the DRS had recovered from the selloff in under 5 months, while the S&P 500 took about 4.5 years to recover.

In market environments when most investors are sitting on the sidelines or passively experiencing their accounts drop, Swan can take advantage of the significantly low prices and set up investors pretty well for the eventual market rebound.

Our LEAPS put option allowed us to get the most value out of our hedging process.

A short-term put option, like a monthly or quarterly put option, may expire during a bear market thus:

A long-term put option (one-to-two years in length) will likely have a longer duration than bear markets thus:

For long-term investors who are worried about a bear market threatening their irreplaceable wealth, a long-term hedge with LEAPS may be the best option.

Hedging for the Long-Term with the Defined Risk Strategy

Avoiding large losses and acquiring more equity during protracted selloffs can better position your clients when the market rebounds. This may reduce recovery time and increase long-term return potential.

A long-term hedge with a LEAPS put option seeks to:

Incorporating an investment approach, like the Defined Risk Strategy that utilizes long-term put options for its hedge may provide the long-term defense investors need to reach their goals.

What is a Put Option? What is a Put Option? It's a way to hedge your investment, like hedging your bets. We explore what a put option is, how it works, and why you may want to use a put option. Conventional wisdom suggests that “hedging your bets” is prudent, and you could do so with a put option.
What Is Hedged Equity - Swan Global Investments
The Importance of Avoiding Big Losses The Best Way to Make Money, Is to Not Lose It — This post examines the claim that minimizing losses is more important to the ultimate success of an investment plan than maximizing gains.
Picking Your Battles: Corrections vs Bear Markets Understand and compare the nature of market corrections vs bear markets, analyzes their impacts, and which is more important to protect against.

All Swan products utilize the Defined Risk Strategy (“DRS”), but may vary by asset class, regulatory offering type, etc. Accordingly, all Swan DRS product offerings will have different performance results due to offering differences and comparing results among the Swan products and composites may be of limited use. All data used herein; including the statistical information, verification and performance reports are available upon request. The S&P 500 Index is a market cap weighted index of 500 widely held stocks often used as a proxy for the overall U.S. equity market. Indexes are unmanaged and have no fees or expenses. An investment cannot be made directly in an index. Swan’s investments may consist of securities which vary significantly from those in the benchmark indexes listed above and performance calculation methods may not be entirely comparable. Accordingly, comparing results shown to those of such indexes may be of limited use. The adviser’s dependence on its DRS process and judgments about the attractiveness, value and potential appreciation of particular ETFs and options in which the adviser invests or writes may prove to be incorrect and may not produce the desired results. There is no guarantee any investment or the DRS will meet its objectives. All investments involve the risk of potential investment losses as well as the potential for investment gains. Prior performance is not a guarantee of future results and there can be no assurance, and investors should not assume, that future performance will be comparable to past performance. All investment strategies have the potential for profit or loss. Further information is available upon request by contacting the company directly at 970-382-8901 or www.swanglobalinvestments.com. 112-SGI-031320