Market Forecasts & the Value of Predictions

Why We Don’t Offer Market Forecasts

Wrangling Vega and the Impact of Volatility on an Option

It’s that time of year again, when every analyst and financial company is rushing to publish their market forecasts,  opinions, and predictions. Let’s see some 2017 market forecasts: 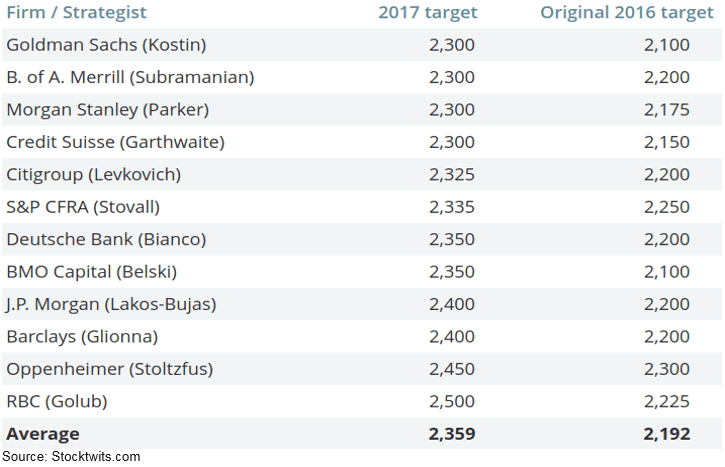 Not exactly going out on a limb with that forecast, are we? This response might seem a little blasé, but it’s truly what we believe. There are two very good reasons why we don’t put out the traditional market forecast that the financial industry regularly churns out.

“Wait, what?!?  But there are so many others clamoring to get out their new year market forecasts…”

Allow me to explain:

1. We don’t know what the markets will do, and no one else knows either!

If someone tells you they know what the markets will do, especially an “expert,” run away. Fast. No one can predict the future, and admitting those three words, “I don’t know,” are important ones in investing.

You may be thinking to yourself, “Isn’t it prudent to make an educated guess, even if you don’t know?”

Sure, experts and analysts will likely admit that they don’t “know” what the markets will do, that their forecast is just a guess or expectation of returns the markets might produce. Experts predicting the future have a very bad track record. There are many that look at forecasting as just probability-based guesswork, built around a dynamic and complex system.

“So what’s the harm in guessing?”

The problem with forecasting is that it leads to bias. Frankly, we don’t want to have a bias on the market; a bias leads to inconsistency, unpredictability, and the potential for massive divergence in outcomes.

‘Even a blind squirrel finds a nut once in a while.’

Even though others might forecast based on various factors, fundamentals, or technical analysis, the fact of the matter is that if you make enough predictions, you’re bound to be right on occasion.

This can lead to the bad idea that there’s value in letting predictions influence your decisions. There’s no way to know ahead of time which forecasts and predictions will be right. Thus, it’s better to ignore them.

One of my favorite fellow research nerds is the extremely smart Charlie Bilello, Director of Research at Pension Partners. His year in review of 2016 highlighted many examples of failed forecasts, predictions, and expert opinions throughout the year. For example, Charlie shared these forecasts by RBS, Jeff Gundluch, and Dennis Gartman near the beginning of the year: 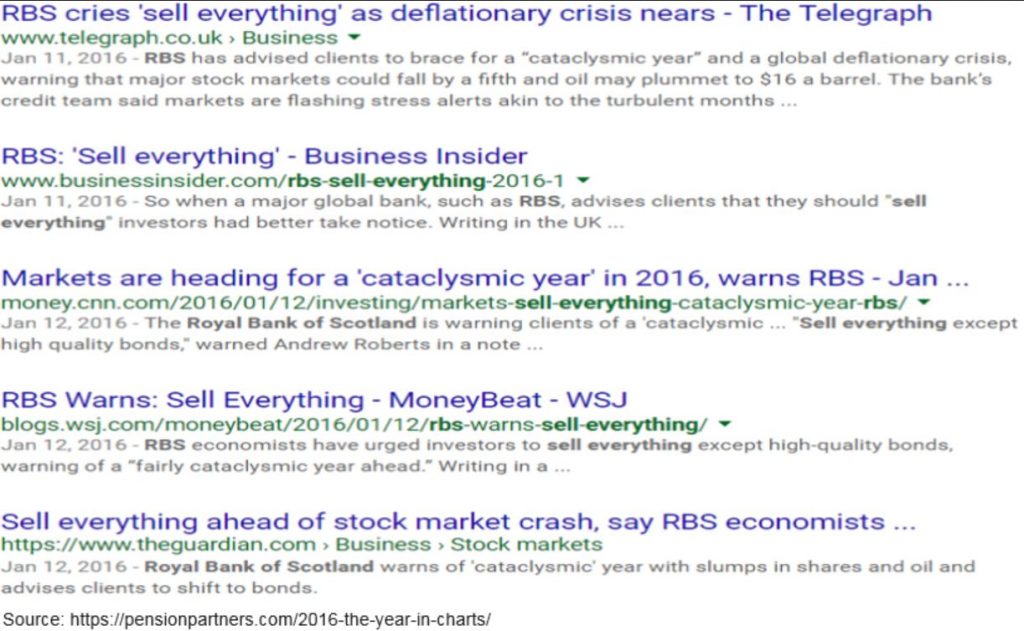 Bilello quotes Jeff Gundluch: “If you’re going to do anything in emerging market equities, my recommendation is to short them. They may fall a further 40%.” Emerging Markets, by the way, ended up over 10% on the year and bottomed out in mid-January around the time of Gundluch’s quote.

Bilello continues by referring to Dennis Gartman who “said crude oil wouldn’t ‘see $44 again” in his lifetime.” At the time, oil was trading at around $30. Bilello goes on to write, “Crude would end April over 77% from its February low, one of the largest short-term rallies in history (the spike in 1990 was larger). Yes, it was back above $44.”

Other seemingly impossible events occurred in 2016, surprising many experts and forecasts, such as the Brexit vote and the Trump election, as well as negative yields on 50-year bonds in Switzerland.

Bilello sums up the game of predictions and forecasts well at the end of his review: “Be forever humble and thankful, and leave the predictions to those whose job it is to entertain.”

They’re all bound to be wrong every now and then. Well, CXO Advisory has fortunately been tracking expert forecasts for quite some time, more than 6,500 of them from 1998 to 2012, and it doesn’t look good for the experts.

The following chart tracks the inception-to-date accuracy of all 6,582 graded forecasts in the sample. The extreme values early in the sample period relate to small cumulative samples. Terminal accuracy is 46.9%, an aggregate value very steady since the end of 2006, even as the number of forecasts continues to grow. 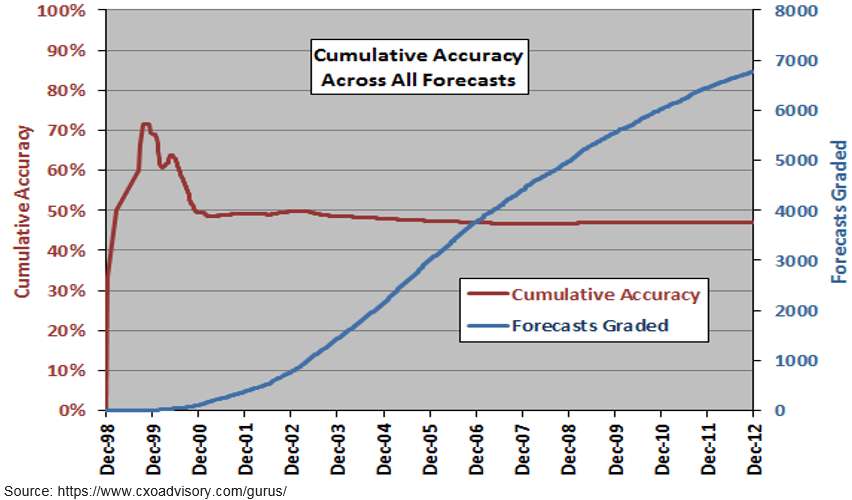 That’s right — only a 46.9% terminal accuracy rate.  So, listen to expert forecasts or flip a coin? Take your pick.

2. We don’t care which direction the markets go.

As stated, the market can do one of three things: it can go up, it can go down, or it can stay flat. This leads to my second bold-sounding statement: we don’t care that much about what the markets do.

Because we are prepared for any of those three possibilities.

Our investment process is built around the concept that defining risk and limiting large losses is the first step to successful and consistent long-term investing. Because of this, we are always hedged to protect against large losses should the market go down.

In addition, because we believe it is difficult to predict and time markets, we are always invested. Because of this unique always invested investment approach, we do not rely on guesswork or market forecasts to make our investment decisions. Instead, the structure of our portfolio holdings generates what we like to refer to as a Target Return Band, a band that shows where we estimate our returns to be based on what the market does for that year.

Each year we focus on delivering returns within this Target Return Band, not on beating the market in the short-term or seeking to adjust our strategy or holdings in the hope that our forecasts are correct. Although we would prefer the market to move up, we also would be fine with it going down and potentially giving us the opportunity to profit on our hedge to buy more of the market at lower levels.

We are very pleased to report that all of our DRS strategies returned within the target return band in 2016 and we will aim for similar results in 2017, no matter what the markets do.

Chasing performance and investing based on predictions by experts almost always ends badly. In the long run, you’ll be happier protecting against large losses, seeking to limit volatility, and avoiding uncertain outcomes, biases, and predictions.

At Swan, we have purposefully decided to be geographically and philosophically different from Wall Street by having an independent and non-traditional approach to investment management. Our investment philosophy is that stock picking and market timing is a very difficult undertaking and risky, very rarely leading to long-term success and consistent outcomes.

Analyzing the roles a hedged equity strategy, like the Swan Defined Risk Strategy, can serve in a portfolio to suit different objectives or investment mandates.

Micah Wakefield, CAIA®, Portfolio Manager and Director of Research & Product Development, is a part of the investment management team at Swan and focuses on research and analysis, strategic planning, and product development. Prior to joining Swan, Micah was the Director of Operations and Trading at an investment advisory firm.

The Mathematics of Diversification The Mathematics of Diversification Download PDF In a previous blog post on diversification, we discussed the key role that correlations play in the success or failure of a diversification strategy. In this post, […]
Active vs Passive — Losing the Forest for the Trees The active vs. passive debate rages on, but at Swan Global Investments, our take is a bit different. Active or passive: it doesn’t matter. This engaging paper unpacks why, and more importantly, discover what may be overlooked in the broader debate.
The Retirement Conundrum: Untying the Gordian Knot Examine how the individual components of the typical 60/40 portfolio and target date funds are ill-positioned to get investors 'to and through' retirement. The paper also introduces some possible alternatives to both capital preservation and income.

Swan Global Investments, LLC is a SEC registered Investment Advisor that specializes in managing money using the proprietary Defined Risk Strategy (“DRS”). SEC registration does not denote any special training or qualification conferred by the SEC. Swan offers and manages the DRS for investors including individuals, institutions and other investment advisor firms. Any historical numbers, awards and recognitions presented are based on the performance of a (GIPS®) composite, Swan’s DRS Select Composite, which includes nonqualified discretionary accounts invested in since inception, July 1997, and are net of fees and expenses. Swan claims compliance with the Global Investment Performance Standards (GIPS®). All data used herein; including the statistical information, verification and performance reports are available upon request. The S&P 500 Index is a market cap weighted index of 500 widely held stocks often used as a proxy for the overall U.S. equity market. Indexes are unmanaged and have no fees or expenses. An investment cannot be made directly in an index. Swan’s investments may consist of securities which vary significantly from those in the benchmark indexes listed above and performance calculation methods may not be entirely comparable. Accordingly, comparing results shown to those of such indexes may be of limited use. The adviser’s dependence on its DRS process and judgments about the attractiveness, value and potential appreciation of particular ETFs and options in which the adviser invests or writes may prove to be incorrect and may not produce the desired results. There is no guarantee any investment or the DRS will meet its objectives. All investments involve the risk of potential investment losses as well as the potential for investment gains.  This analysis is not a guarantee or indication of future performance. Prior performance is not a guarantee of future results and there can be no assurance, and investors should not assume, that future performance will be comparable to past performance. Further information is available upon request by contacting the company directly at 970.382.8901 or visit www.swanglobalinvestments.com. 061-SGI-030317