Timing Is Everything—Or Is It?

It’s often said that “timing is everything.” Given the volatile state of the equity markets over the last few decades, that old adage certainly appears to hold true in the world of investing. Timing risk for when one enters and exits the market can have a large impact on the final wealth of a portfolio.

The combination of timing and the unpredictable nature of the markets results in outcome uncertainty. This makes it hard to plan for the future. Whether it’s retirement or starting a new business, timing and outcome uncertainty can cause more stress than is needed, especially for those who take a purely passive investing approach.

A Passive and Bumpy Ride

Those who are passively invested in the markets, usually experience a pretty bumpy ride. To visually showcase this, the charts below provide various ten-year results for the S&P 500. Each period starts at the beginning of a calendar year and extends out for a decade. The first ten-year period stretches from January 1998 to December 2007; the last one runs from January 2010 to December 2019.

As this chart shows, there is a wide degree of variation in ten-year returns. The best decade is the one ending December 2019. The annualized return for that period is 13.56%. This period includes the incredible bull market initiated in early March 2009 and has no bear market.

Conversely, the worst decade runs from January 1999 to December 2008 and includes both the entire dot-com bear market and the credit crisis bear market. The unlucky investor in that date range would have lost an average of 1.38% per year and ended up with a portfolio worth almost 13% less than when he or she started—truly a “lost decade.” A hypothetical $100,000 investment on January 1st over these periods ranged from a high of $356,657 to a low of $87,006.

Certainly, one can see the uncertainty of outcomes when investing at various times in the market and conclude that timing is indeed everything.

So how does one solve this problem of outcome uncertainty with respect to timing while seeking to achieve long-term investment goals?

At Swan, we would argue that consistency is the best solution to the timing issue. If one can decrease volatility by providing consistent returns, the importance of timing fades away.

A Hedged and Smoother Ride

With a smoother and consistent experience, there is a better chance that investors will stick with an investment and their investment plan. Consistent results may provide better basis for financial plans as the outcome uncertainty and timing risk is minimized much more. We seek to do this with our hedging strategy, the Defined Risk Strategy (DRS).

We can see how hedging can help provide a smoother ride in the chart below. It contains the same thirteen decades for the Defined Risk U.S. Large Cap Select Strategy: 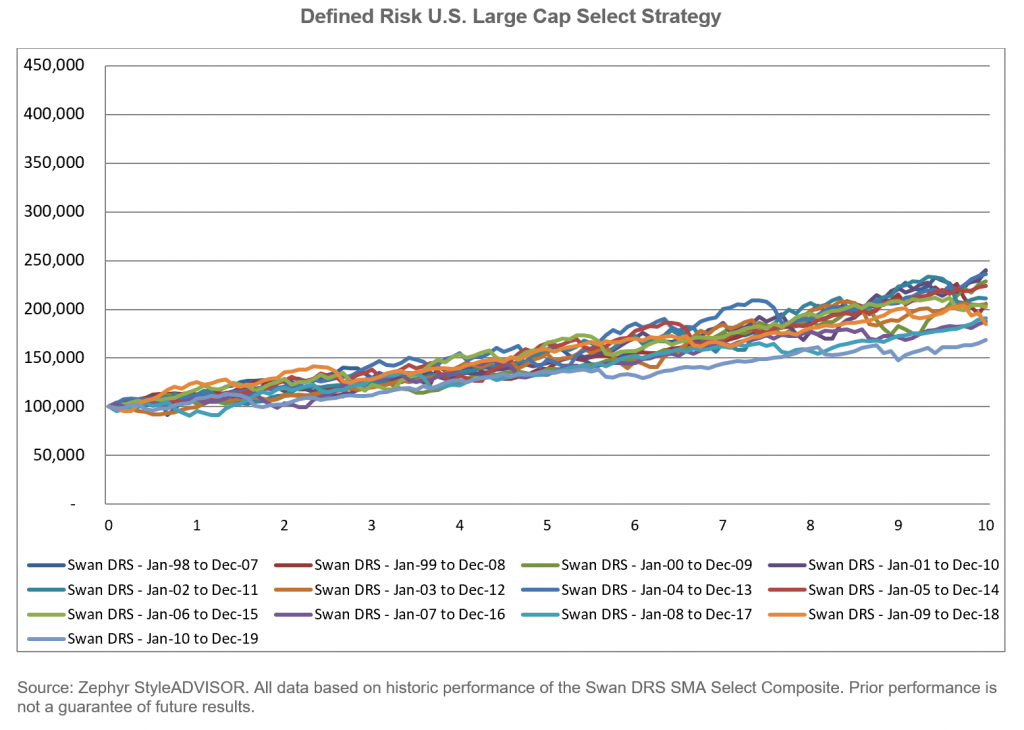 The Defined Risk U.S. Large Cap Select Strategy returns display a remarkable degree of long-term consistency. The worst of these thirteen decades was 5.34%, the best was 9.15%. The range of outcomes on an initial $100,000 investment is a low of $168,287 to a high of $240,110. It is also important to note that all but one of the decades include not only the major bear markets of 2000-02 and 2007-08, but also numerous short-term corrections like the Russian default/LTCM crisis of 1998, the “flash crash” in May 2010, and the U.S. debt downgrade in August 2011. The DRS has successfully weathered such events and has historically provided very smooth returns.

The table below summarizes and compares the results of the Defined Risk U.S. Large Cap Select Strategy and the S&P 500:

How has Swan been able to achieve these results?

At Swan, we do not attempt to time the market by trying to call market tops and bottoms. Our distinct hedged equity process allows invested to remain invested while mitigation risk.

The majority of the DRS assets are always invested in the markets. However, we also always hedge our portfolio by placing downside protection on our equity holdings.

To participate in potential market upside.

To mitigate risks of bear markets.

To offset the cost of the hedge.

When the market drops and the equity loses value, the put option increases in value, and vice versa.

This counter-balancing investment approach is engineered to NOT lose big.

A HEDGE IS NOT INSURANCE AGAINST LOSSES

The effectiveness of the hedge and degree of downside risk mitigation varies with market conditions. The Defined Risk Strategy can and does have periods of losses.

This hedging process is an important and powerful element of the strategy, designed to reduce losses on the downside, potentially allow DRS  investors to capture additional shares during those major losses, and provides a smoother investment experience- all of which help improve overall return long-term.

That isn’t to say that in the short term, the DRS won’t have its losses. Every investment strategy has its risks. An aggressive strategy will have the risk of losses. A conservative strategy bears the opportunity costs of forgoing upside gains.

At Swan Global Investments, we believe we have struck the right balance between upside participation and downside protection for those investors with a long-term horizon and a rational, patient view of the markets.

To learn more about our Defined Risk Strategy hedged equity solutions, request a meeting with one of our investment consultants who can help you implement the right solution for your client’s objective and risk profile.

Math Matters: How Math Impacts Results Investors often are unaware of the math that really drives investment results. This paper dives into the 4 main mathematical principles behind long-term investment success.
Active vs Passive — Losing the Forest for the Trees The active vs. passive debate rages on, but at Swan Global Investments, our take is a bit different. Active or passive: it doesn’t matter. This engaging paper unpacks why, and more importantly, discover what may be overlooked in the broader debate.
The Retirement Conundrum: Untying the Gordian Knot Examine how the individual components of the typical 60/40 portfolio and target date funds are ill-positioned to get investors 'to and through' retirement. The paper also introduces some possible alternatives to both capital preservation and income.
Where Does Hedged Equity Fit? Analyzing the roles a hedged equity strategy, like the Swan Defined Risk Strategy, can serve in a portfolio to suit different objectives or investment mandates.

Swan Global Investments, LLC is a SEC registered Investment Advisor that specializes in managing money using the proprietary Defined Risk Strategy (“DRS”). SEC registration does not denote any special training or qualification conferred by the SEC. Swan offers and manages the DRS for investors including individuals, institutions and other investment advisor firms. Any historical numbers, awards and recognitions presented are based on the performance of a (GIPS®) composite, Swan’s DRS Select Composite, which includes non-qualified discretionary accounts invested in since inception, July 1997, and are net of fees and expenses. Swan claims compliance with the Global Investment Performance Standards (GIPS®). All data used herein; including the statistical information, verification and performance reports are available upon request. The S&P 500 Index is a market cap weighted index of 500 widely held stocks often used as a proxy for the overall U.S. equity market. Indexes are unmanaged and have no fees or expenses. An investment cannot be made directly in an index. Swan’s investments may consist of securities which vary significantly from those in the benchmark indexes listed above and performance calculation methods may not be entirely comparable. Accordingly, comparing results shown to those of such indexes may be of limited use. The adviser’s dependence on its DRS process and judgments about the attractiveness, value and potential appreciation of particular ETFs and options in which the adviser invests or writes may prove to be incorrect and may not produce the desired results. There is no guarantee any investment or the DRS will meet its objectives. All investments involve the risk of potential investment losses as well as the potential for investment gains. Prior performance is not a guarantee of future results and there can be no assurance, and investors should not assume, that future performance will be comparable to past performance. All investment strategies have the potential for profit or loss. Further information is available upon request by contacting the company directly at 970-382-8901 or www.www.swanglobalinvestments.com 155-SGI-040319