The DRS was launched in 1997 to provide investors with a better way to invest over full-market cycles—generate consistent returns and mitigate risks to irreplaceable capital.

Consistency and Smoothing of Returns 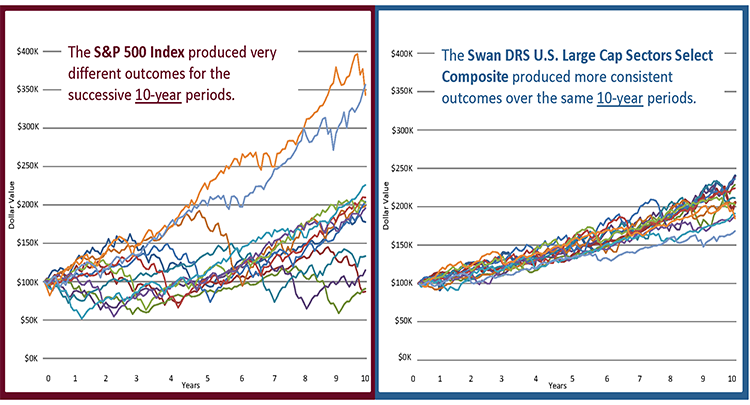 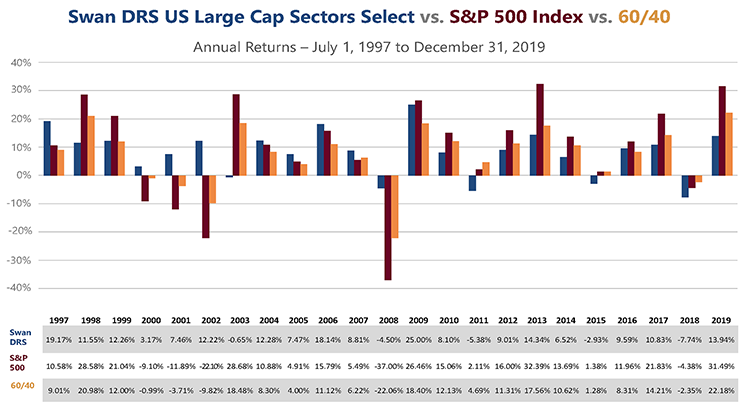 Source: Zephyr StyleADVISOR and Swan Global Investments. All data based on historical performance of the S&P Total Return Index and the Swan DRS Select Composite. Prior performance is not a guarantee of future results.

Passive equity investments expose investors to a volatile ride with unpredictable periods of severe losses along the way.

By reducing volatility and avoiding major losses, the DRS has a dramatic impact on investor experiences through market cycles.

Source: Swan Global Investments and Morningstar; the Barclays U.S. Aggregate Bond Index and the S&P 500 Index are unmanaged indices, and cannot be invested into directly. Past performance is no guarantee of future results. DRS results are from the Swan Defined Risk Select Composite, net of fees, as of 12/31/2019. Structures mentioned may not be available within your Broker/Dealer.

Bear markets are unpredictable, but inevitable.

Diversification alone didn’t work to protect most investors in 2008. What are you doing differently now to protect your irreplaceable capital?

Our Defined Risk Strategy has performed admirably in protecting capital during the last two bear markets.

Ask your investment advisor about how the DRS may help you remain invested yet help to protect your irreplaceable capital.

The Defined Risk Strategy is available in various structures and across major asset classes.

Rolling returns are very useful in building long-term financial plans and constructing portfolios, as not every client invests at the same time.

As such, rolling returns are a more comprehensive way of forecasting potential returns than trailing returns.

Source: Swan Global Investments and Zephyr StyleADVISOR. Data based on historic returns of a 60/40 blended composite and the Swan DRS Select Composite net of fees, from 7/1997 to 12/31/2018, and assume no portfolio withdrawals. The 60/40 blended composite, weighted 60% in the S&P 500 Index, which consists of approximately 500 large cap stocks, and 40% in the Barclays US Aggregate Bond Index. The 60/40 is rebalanced monthly. The Barclays US Aggregate Bond Index is a broad-based flagship benchmark that measures the investment grade, US dollar-denominated, fixed-rate taxable bond market. The index includes Treasuries, government-related and corporate securities, MBS (agency fixed-rate and hybrid ARM pass-throughs), ABS and CMBS (agency and non-agency). Results in the table are the best, worst, and average annualized returns, based on month-end returns, for every rolling period listed within the overall time frame of July 1st, 1997 to December 31st, 2018. Prior performance is not a guarantee of future results and there can be no assurance, and investors should not assume, that future performance will be comparable to past performance.

The Defined Risk Strategy was launched in July of 1997.

The result: a table that shows the best, worst, and average returns investors would have experienced over those given holding periods, regardless of which month they began investing.

By reducing volatility and avoiding major losses, the DRS has a dramatic impact on rolling returns (experiences of investors) through market cycles.

The takeaway—historically, the longer investors held the DRS, the better their overall returns on a relative and risk-adjusted basis.

The Target Return Band is our benchmark—measuring actual results versus return expectations.

Our goal is for any given annual return by a given asset class or index (represented by the grey diagonal line), that the return for our corresponding Defined Risk solution is within or above the blue-shaded Target Return Band.

Source: Zephyr StyleADVISOR and Swan Global Investments; Indexes are unmanaged and one cannot be invested into directly. Past performance is no guarantee of future results. NOTE – this chart is for illustration purposes, not a guarantee of future performance. The charts and graphs contained herein should not serve as the sole determining factor for making investment decisions. The results above refer to the DRS U.S. Small Cap Composite, the DRS Foreign Developed Composite, and the DRS Emerging Markets Composite respectively, and include a 1% fee, from their inception through 6/30/2018. Structures mentioned may not be available within your Broker/Dealer. Composites on other asset classes not shown. See disclosures at the end of this presentation for more information about benchmarks and indexes.

Across the four major asset classes shown above, our strategy has met or exceeded our Target Return Band over 98% of the time.

More About the Target Return Band

The success of our Defined Risk Strategy prompted us to apply it across multiple products and assets, providing our clients with additional opportunities to use this time-tested approach.

Learn more about the various types of investment structures or contact a Swan investment consultant for more information.