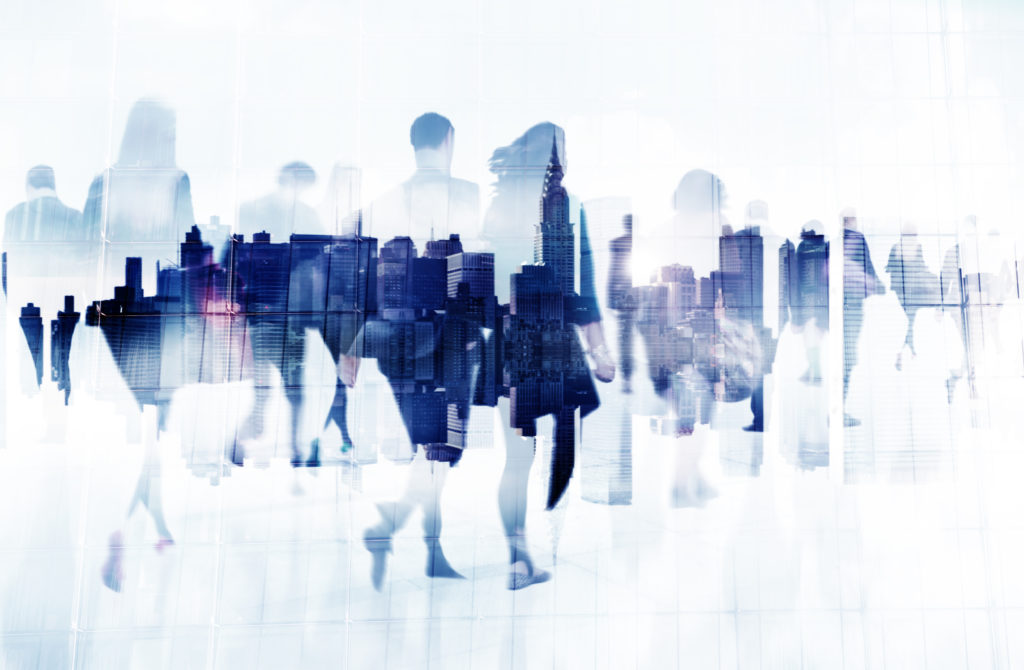 The rebound in the stock market and the US economy from the onset of the pandemic has been impressive. The S&P 500 has roughly doubled since the pandemic-induced lows of March 2020 and US economic growth is also roaring. Goldman Sachs’ economic growth target  is a hefty 5.6% in 2021. To put that in perspective, in the previous decade, the average growth rate was below 2%, and since Q2 of 2000, it has never reached the 5% level.

However, amidst this exuberance lies a serious issue that could derail the  recovery.

High levels of unemployment continue to plague the labor market despite available jobs.  As fewer people return to the workforce than expected, businesses are struggling to fill open jobs, resulting in a chain of effects that could threaten economic growth and prosperity.

Last week on October 8th, the Labor Department reported that the U.S. economy created jobs at a much slower-than-expected pace in September. Non-farm payrolls increased by only 194,000 for the month, compared with the Dow Jones estimate of 500,000. The current unemployment rate is 4.8%, and there are 7.7 million unemployed.

Both measures are down considerably from their highs at the end of the February-April 2020 recession but remain above their levels prior to the COVID-19 pandemic (3.5 percent and 5.7 million, respectively, in February 2020).

Yet this higher level of unemployment isn’t due to a lack of available jobs.  According to the U.S. Bureau of Labor Statistics, there were 10.9 million job openings as of the last day in July.  In fact, the labor participation rate, another measure of labor market health, is only 61.6% as of the end of September.

The chart below shows the civilian labor force participation rate, seasonally adjusted, from  September 2001 through September 2021. 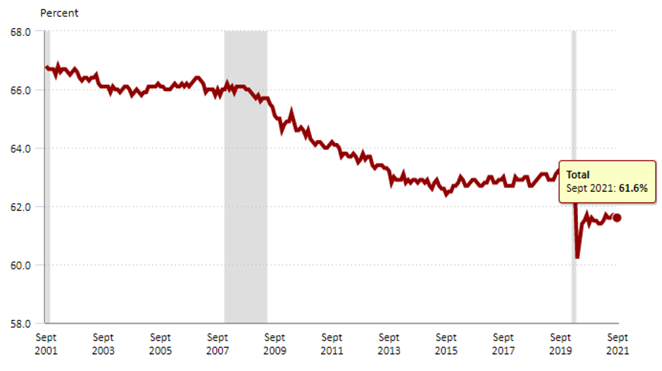 The level has been falling since the dawn of this century, but is currently at very low levels, with about one-third of the adult working-age population not participating in the labor force.

Perhaps most ominous is the ‘quit rate’ of 2.9%, the highest since December 2000, with nearly 4.3 million people quitting their jobs in August alone.

The data indicate employers are struggling to recruit workers despite high levels of unemployment, which does not bode well for continued progress toward full economic recovery.

It was expected that more people would return to the workforce in September with the opening of in-person schooling in most parts of the country. Yet this has not occurred at anywhere near expected levels and some Wall Street analysts project the woes could linger longer than expected.

Many economists attribute the lag in workers returning to the workforce to the surge in the COVID Delta Variant. However, data from the largest CDC study and from around the world show vaccines are highly effective in reducing transmission and reducing serious illness and hospitalization with the Delta variant. With highly effective therapeutics and KN95 masks, workers can protect themselves even more. So if workers are vaccinated and yet still worried, perhaps they are reacting to politically charged media attention and mixed messaging around the virus, vaccines, and mandates.

Policies like vaccine mandates are clearly impacting the labor markets.

Here’s a map of the states with vaccine mandates on businesses:

On September 10th, President Biden announced a vaccine mandate for federal employees and federal contractors, many contractor firms and hundreds of thousands of military personnel and reservists are wrestling with the ability and willingness to comply as the mandate deadline nears. Further, President Biden announced a controversial plan to roll-out a nationwide private-sector vaccine mandate for businesses with over 100 employees to be enforced by the Occupational Safety and Health Administration, which is now being reviewed by the OMB.

Yet the mandates may not be necessary. Delta seems to be waning and cases are dropping significantly. Meanwhile, overall U.S. vaccination rates nationwide show 56.8% are fully vaccinated, and 66.7% have at least 1 vaccine dose, according to the Mayo Clinic’s COVID-19 Vaccine Tracker.  If you look at the age groups most susceptible, the vaccination rates are much higher, and there are countless millions of Americans who have natural immunity. This data should bode well for labor market renormalization and help alleviate concerns of those hesitant to return to work.

While federal COVID-driven unemployment benefits have ceased, food stamps/SNAP benefits were raised 27% above pre-pandemic level (largest increase in history), rent moratoriums and/or eviction bans are still in effect in some areas, and other programs like the Child Tax Credit expansion remain. Research shows such benefits provide a disincentive for some to rejoin the workforce.

Congress is currently negotiating massive spending bills that include proposed further expansions of transfer payment programs. The Congressional Budget Office, in congressional hearings, stipulates that transfer payments create disincentives to work: “As income rises, phasing out a benefit (such as SNAP) increases the marginal tax rate and reduces the incentive to work. SNAP also effectively increases the after-tax income of its recipients—even as the benefit phases out—further discouraging work.”

Workers have been quitting their jobs in the highest rate since December 2000. This phenomenon has been dubbed ‘The Great Resignation’ and is redefining employment as companies adopt more work-from-home policies. Presumably, these workers will eventually find work elsewhere that they find more appealing, thus minimizing their time spent unemployed. However, about 3 million people between the ages of 25-54 left their jobs during the pandemic and have not returned to work. Some economists state that other factors—including child care issues, skill shifts during the pandemic, and workers’ reevaluation of their life goals—are playing a major role in prompting people to remain at home thus contributing to the worker shortage.

With myriad factors influencing high unemployment, we are already seeing the labor shortage consequences to our supply chain and inflation.

1. Supply Chain Consequences on the Market

The labor shortage in America is contributing to supply chain issues plaguing a wide variety of industries and sectors, threatening to impact corporate revenues and profits. 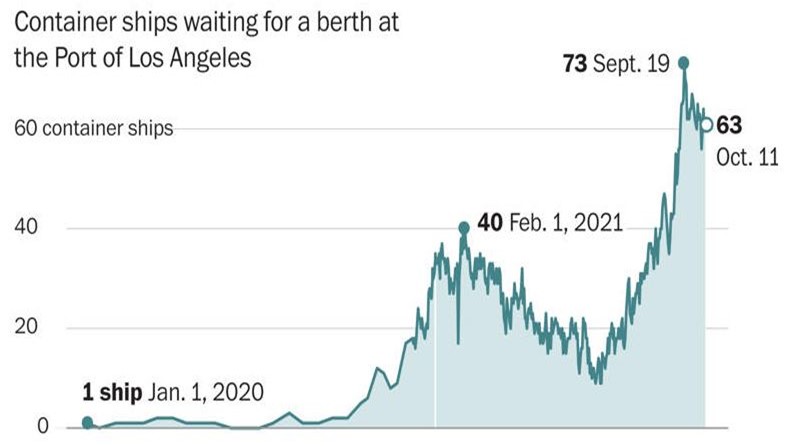 Companies are challenged to fill hourly, entry-level and mid-level nonmanagerial positions, especially in manufacturing, hospitality, food service,  and healthcare. Difficulty in finding workers is contributing to bottlenecks in shipping, trucking, and rail lines as demand for containers picks up from pandemic-induced lows.

For restaurants across the nation, hit hard by the pandemic, the struggle to find workers remains common, even as restrictions ease in many parts of the nation.

In the past month, many companies have cited supply chain challenges in their earnings reports and guidance—here are just a few:

Persistent labor shortages may ultimately hamper overall economic growth and prosperity as it impacts workflow and productivity. In September, in a PwC survey of Fortune 1000 and private companies, almost  90% of Chief Financial Officers (CFOs) are facing unusually high employee turnover and more than 80% believe a shortage of labor will harm revenue growth. As far as investors are concerned, lower economic growth could reduce stock price valuations for many publicly-traded companies.

To attract workers to fill open jobs, and in some cases to simply retain existing workers, companies are offering higher wages. In September, Amazon (AMZN), Walmart (WMT), Walgreens (WBA), and CVS (CVS) increased their minimum wages. Higher labor costs may be passed along to consumers, fueling higher inflation, which has already been a story dominating headlines and a rising concern for investors.

High levels of inflation hurt the economy. Cash-strapped consumers will reduce consumption, reducing aggregate demand. Inflation may also lead to higher interest rates, which drive up borrowing costs for businesses and consumers. This could, for example, put a damper on the robust housing market, hurting businesses that benefit from activity in that sector.

What Can Investors Do in the Face of a Struggling Labor Market?

This is a good time for investors to review their portfolios to ensure they are properly invested for what could be a choppy period ahead. Despite the “roaring” market recovery, we have yet to see how current labor shortages may impact the economy, and ultimately stock prices. However, we are beginning to see the cracks forming, such as lingering backlogs, supply shortages, and inflation, all of which could create significant headwinds. Investors may want to prepare their portfolios before these headwinds cause significant downward pressure on the markets.

As leaders in hedged equity and options-based strategies, Swan Global Investments offers a range of solutions intended to help investors reduce risk in their portfolios while providing an opportunity for upside growth.

We don’t hold a crystal ball, but we do believe investors should appropriately hedge the risks of their portfolios in all market environments.

Consequences of Inflation on Stocks Learn how inflation may affect stock markets and how investors can combat the consequences of inflation.
The Effects of Inflation While the causes of inflation are many, we believe that the effects of inflation are underappreciated or poorly understood. With inflation being largely irrelevant over the last 40 years, this isn’t a surprise. However, it might be time to revisit some of the lessons of Economics 101 as inflation returns.
Return of Higher Inflation 2021 The specter of higher inflation has investors concerned. Swan Global Investments has been concerned about this moment for years. Explore the drivers of higher inflation, what the current inflation data indicates, and what investors can do if higher inflation is here to stay.
Is the 60/40 Portfolio Broken? Is 60/40 portfolio broken? Financial experts, and investors alike, ponder if this approach will meet expectations going forward. The culprit? Bonds.

Swan Global Investments is an SEC registered Investment Advisor that specializes in managing money using the proprietary Defined Risk Strategy (DRS). Please note that registration of the Advisor does not imply a certain level of skill or training. All investments involve the risk of potential investment losses as well as the potential for investment gains. Prior performance is no guarantee of future results and there can be no assurance that future performance will be comparable to past performance. This communication is informational only and is not a solicitation or investment advice. Further information may be obtained by contacting the company directly at970-382-8901 or www.swanglobalinvestments.com. 279-SGI-102121