What is a Put Option?

The What, Why, & How of Put Options

With all of these actions, the goal is to manage the big, external risks that could ruin the farmer, airline, or company.

Considering stock markets are trading near all-time highs, investors might wonder how to “hedge your bets” in their portfolios. With many investments, hedging can be accomplished with the use of put options.

There are many investment strategies that hedge the market, and many of them use put options to do so. If one were to look up the definition of “put option,” the official definition is:

“A put option is an option contract giving the owner the right, but not the obligation, to sell a specified amount of an underlying security at a specified price within a specified time.” (Source: Investopedia)

“Can I get that in plain English please?”

Basically, a put option allows someone to “lock in” the sale price of an asset. If someone owns a put option, they can force someone else to purchase an asset at a set, pre-defined price.

That agreed-upon price is known as the “strike price” and is defined in the option contract.

The actual market price of that asset might end up being significantly lower than the strike price, but the put option has locked in the sales price.

Assume the stock in XYZ Corp is trading for $100 per share on January 1st. Someone decides to buy a put option with a $100 strike price and a three-month expiration. Then, let’s assume by March 31st the price of XYZ Corp’s stock has fallen to $60. 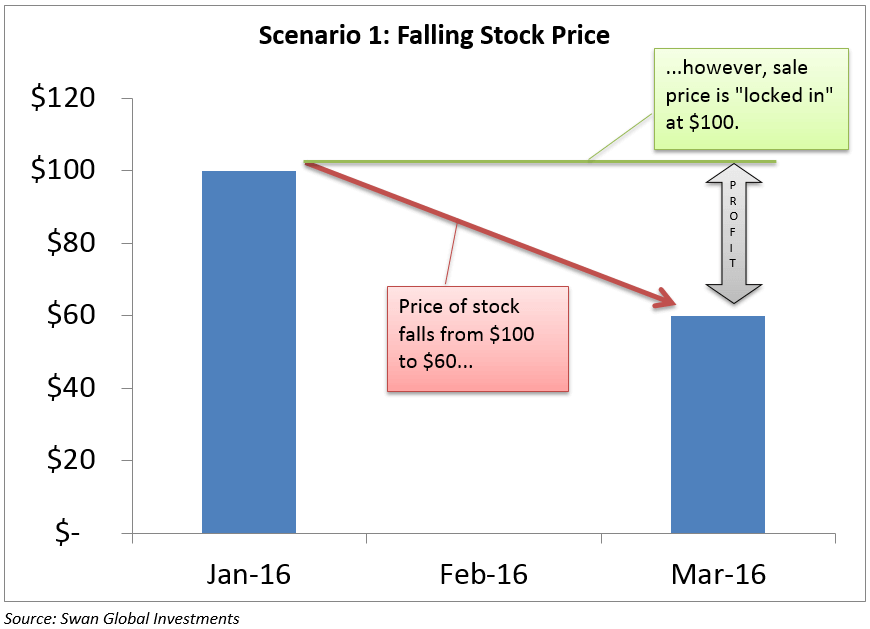 The owner of the put option has locked in a sales price of $100, even though the market price of XYZ is only $60.

Someone else has to pay him the full $100 for XYZ stock.

Of course, it goes without saying that put options are not free. In the scenario above, the holder of that put option might have paid $5 for his three-month put option on XYZ on January 1st. That out-of-pocket cost would reduce the profit from $40 to $35 in the above scenario.

But what if the price of XYZ stock goes up, rather than down? 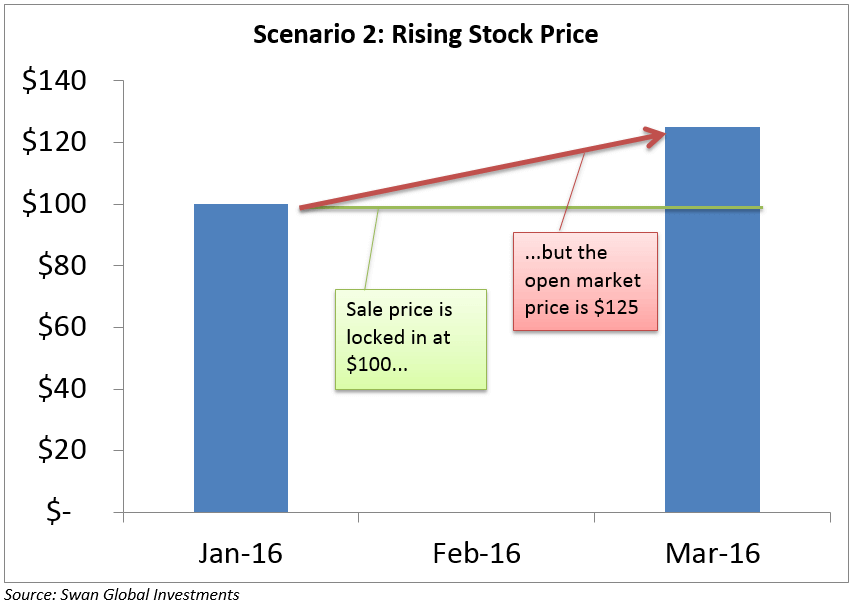 Again, the put option gives the investor the chance to sell XYZ for the locked-in price of $100. But the market price is now $125! The investor could sell XYZ on the open market and collect $125. The fact that he has a put option at $100 is now irrelevant and the put option, at expiration, is worthless.

Back in January, the investor did not know if XYZ was going to go up or down, but he had to pay that $5 premium to purchase the put option regardless. The holder of the put option hopes that XYZ falls far enough so that the gap between the strike price and the market price is at least enough to cover the $5 out-of-pocket costs he had when purchasing the put option. If that gap is larger than $5, then the remainder is all profit to him. However, if XYZ is flat or rises, then the option will eventually expire and the investor will be out $5.

It should be noted that all options eventually expire. Some expire after only a week, some might have expiration dates going out for two or three years.

The time to expiration impacts the price someone might pay for an option. Generally speaking, the longer to expiration, the more valuable the option is since there is more time for a move to occur.

Why would someone want to own a put option?

There are two primary reasons for owning a put option.

1 — With a speculative position, someone is taking a bet.

Maybe Steve the speculator has a very bearish view on an asset and wants to profit if the price were to fall. Steve is looking at our previous example and thinks XYZ is overvalued at $100. Steve thinks it is only a matter of time before XYZ’s stock drops. If Steve believes that will happen within three months, he can pay the premium (in the previous example, $5) for a put option.

If Steve is right and the stock falls within the three-month window, he can profit from XYZ’s fall. In fact, the more XYZ falls, the more profitable his bet becomes. If XYZ doesn’t fall, well, the $5 premium Steve spent is now a sunk cost.

2 — Alternatively, put options can be used for hedging purposes.

Hedging can be thought of as purchasing protection, e.g. a protective hedge.

Say, for example, Heather the hedger is a lifetime employee of XYZ Corp. Heather has spent her entire career at XYZ and has amassed a healthy amount of XYZ stock. Maybe 90% of Heather’s wealth is tied up in XYZ and she is approaching retirement. What should Heather do? She doesn’t want to sell her stock because she feels a certain loyalty to XYZ and she would also get hit with a big tax bill. On the other hand, maybe XYZ’s stock has been volatile of late and Heather doesn’t want to see her wealth drop by 25% or more just as she’s about to retire.

In the above scenario, Heather can hedge her XYZ by purchasing some put options on her XYZ stock. She locks in a sales price for XYZ. Obviously, she hopes that XYZ continues to go up, but in case XYZ goes down, she can set a sale price to protect against catastrophic losses. Of course, Heather will have to pay for this hedge. Put options are not free and they do expire, so her hedging strategy will require her to pay to maintain protection on her XYZ stock.

Hedging with a Put Option is Similar to Insurance

In a way, a portfolio hedging strategy is a lot like purchasing insurance for the portfolio.

People buy home, auto, health, and life insurance to protect against catastrophic losses. Insurance policies have a cost to them, also known as a premium. Insurance policies are also typically valid for a set amount of time — usually three months, six months, or a year.

If the insurance policies are not used, they have to be renewed and a new premium has to be paid in order to maintain coverage.

Certainly, if someone opted not to carry insurance, they would have a lot more disposable income. However, the risk of a major, life-changing catastrophe is usually more risk than most individuals are willing to bear. So most people willingly give up a portion of their income to protect what they have.

It is for hedging purposes that Swan Global Investments utilizes long-term put options in the Defined Risk Strategy (DRS). The long-term put options used in the DRS have an expiration date far into the future (usually two years) and do not apply to a single stock, but for the entire market (as defined by the S&P 500). That way, if the market sells off in a major fashion, the DRS has “locked in” a sales price on the S&P 500.

The DRS is always invested in the market via cost-efficient ETFs, but that buy-and-hold position in the market is always hedged to protect against major sell-offs by the intelligent and efficient use of put options.

Finally, it should be noted that trading options is not for amateurs. There are rules and regulations related to trading options in personal accounts. One must prove themselves knowledgeable about options before most custodians will let them buy or sell options. It is the opinion of Swan Global Investments that managing options is a job best left to professionals.

Keep Calm and Hedge What comes to mind when you hear the word “hedge”? Hedge funds? Scandals? High risk? Leverage? Fraud? Hedging gets a bad rap. When the market is volatile, hedging can be a valuable tool for investors to manage risk in their portfolios and help manage their emotions.
Picking Your Battles: Corrections vs Bear Markets Understand and compare the nature of market corrections vs bear markets, analyzes their impacts, and which is more important to protect against.
The Importance of Avoiding Big Losses The Best Way to Make Money, Is to Not Lose It — This post examines the claim that minimizing losses is more important to the ultimate success of an investment plan than maximizing gains.

Swan Global Investments, LLC is a SEC registered Investment Advisor that specializes in managing money using the proprietary Defined Risk Strategy (“DRS”). SEC registration does not denote any special training or qualification conferred by the SEC. Swan offers and manages the DRS for investors including individuals, institutions and other investment advisor firms. Any historical numbers, awards and recognitions presented are based on the performance of a (GIPS®) composite, Swan’s DRS Select Composite, which includes nonqualified discretionary accounts invested in since inception, July 1997, and are net of fees and expenses. Swan claims compliance with the Global Investment Performance Standards (GIPS®). All data used herein; including the statistical information, verification and performance reports are available upon request. The S&P 500 Index is a market cap weighted index of 500 widely held stocks often used as a proxy for the overall U.S. equity market. Indexes are unmanaged and have no fees or expenses. An investment cannot be made directly in an index. Swan’s investments may consist of securities which vary significantly from those in the benchmark indexes listed above and performance calculation methods may not be entirely comparable. All Swan products utilize the Defined Risk Strategy (“DRS”), but may vary by asset class, regulatory offering type, etc. Accordingly, all Swan DRS product offerings will have different performance results, and comparing results among the Swan products and composites may be of limited use. Economic factors, market conditions, and investment strategies will affect the performance of any portfolio and there are no assurances that it will match or outperform any particular benchmark. Therefore, comparing results shown to those of such indexes may be of limited use. The adviser’s dependence on its DRS process and judgments about the attractiveness, value and potential appreciation of particular ETFs and options in which the adviser invests or writes may prove to be incorrect and may not produce the desired results. There is no guarantee any investment or the DRS will meet its objectives. All investments involve the risk of potential investment losses as well as the potential for investment gains.  This analysis is not a guarantee or indication of future performance. Prior performance is not a guarantee of future results and there can be no assurance, and investors should not assume, that future performance will be comparable to past performance. All investment strategies have the potential for profit or loss. Further information is available upon request by contacting the company directly at 970.382.8901 or visit www.swanglobalinvestments.com.  278-SGI-111016