We use cookies on our site. You may control whether and how your browser accepts cookies; please see your browser help documentation for more information. To learn more about the information we collect and how we use it, view our Privacy Policy www.swanglobalinvestments.com/disclosures Click here to Accept.

The Defined Risk Strategy as a Capital Preservation Solution

Across Swan’s client base, there are some who utilize the Defined Risk Strategy (DRS) as an alternative to fixed income. Traditionally, bonds have played two roles within a portfolio: generation of yield and protection of principal. However, the worldwide “new normal” monetary policy of ultra-low or even negative interest rates and massive liquidity injections into the financial system has parched savers of yield. These days, savers are forced to choose between yield or protection of principal—they cannot have both.

With its emphasis on not losing big and superior bear market performance, the DRS could seek to fill the capital preservation role in a portfolio that bonds have been fulfilling.

The DRS and Capital Preservation 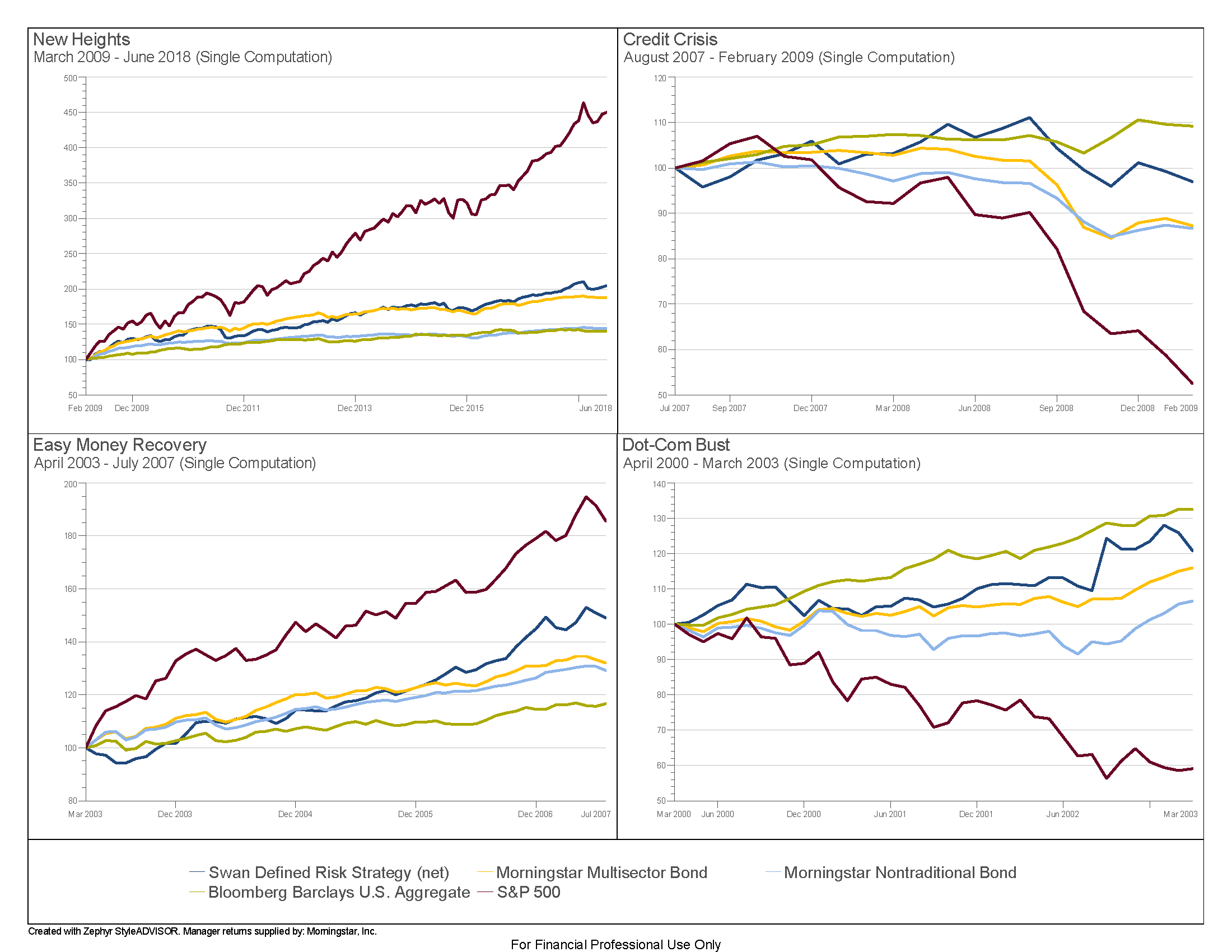 Against the category averages for Multi-sector Bond and Non-traditional Bond, the DRS performs quite well. In terms of absolute return, DRS outperforms traditional and alternative fixed income by a wide margin. The volatility of the DRS is certainly higher than any of the bond options, but the DRS’s superior Sharpe ratio of 0.64 indicates the additional risk was more than adequately rewarded with additional return.

While the above table indicates that traditional investment grade bonds represented by the Barclays U.S. Aggregate are the least correlated to the S&P 500 and offer the best downside protection, that might not always be the case going forward. It is questionable whether investors are truly aware of the magnitude of the risks embedded in traditional investment-grade bonds.

When investors make the decision to move into non-investment grade or alternative fixed income, they are willingly taking on more credit and liquidity risk. But the biggest risk to investment grade bonds is, of course, interest rate or duration risk. Just like systematic, market risk is the 800-pound gorilla in the equity markets, interest rate risk is the primary driver of bond returns.

While negative numbers are seen across the board, the above table of duration and return doesn’t truly highlight the magnitude of interest rate risk hanging over the market. According to a recent Bloomberg article, Goldman Sachs estimates that bond holders stand to lose $1 trillion if rates rise unexpectedly by just 1%:

“Lurking in the bond market is a $1 trillion reason for the Federal Reserve to go slow on interest-rate increases. That’s how much bondholders stand to lose if Treasury yields rise unexpectedly by 1 percentage point, according to a Goldman Sachs Group Inc. estimate. A hit of that magnitude would exceed the realized losses since the financial crisis on mortgage bonds without government backing, Goldman Sachs analysts Marty Young and Charles Himmelberg wrote.”1

Over the last few years, some market watchers have made the joke that investment-grade bonds were once risk-free return, but today, bonds are return-free risk. That statement doesn’t seem too far off the mark these days, and it is one of the reasons why some practitioners are using the Defined Risk Strategy in place of bonds in their portfolios.

To learn more about how Defined Risk Solutions can supplement your fixed income strategy, contact us here.

Marc Odo, CFA, FRM, CAIA®, CIPM®, CFP®, Client Portfolio Manager, is responsible for helping clients and prospects gain a detailed understanding of Swan’s Defined Risk Strategy, including how it fits into an overall investment strategy. Formerly, Marc was the Director of Research for 11 years at Zephyr Associates.

How Much DRS is Enough? This post continues the ‘Where the DRS Fits’ series, part 1 of 4, exploring how much of the Swan Defined Risk Strategy is enough to meaningfully impact the portfolio and improve the risk/reward dynamic to better position investors for long-term success.
Examining Effectiveness of Target Date Funds Examining Effectiveness of Target Date Funds Download PDF Easy Does It or Easy Doesn’t Do It? It’s fair to say that most people like when complicated concepts or difficult tasks are ‘made easy’. […]
The Defined Risk Solution as a Core Equity Solution This post continues the ‘Where the DRS Fits’ series, exploring how the Swan DRS can serve as a total portfolio solution, as designed by founder Randy Swan.
The Importance of Consistency of Returns Consistency is King, both in Sports and Investing Consistency of returns is an important driver of overall investment results, just like in sports and other areas of our lives.

Swan Global Investments, LLC is a SEC registered Investment Advisor that specializes in managing money using the proprietary Defined Risk Strategy (“DRS”). SEC registration does not denote any special training or qualification conferred by the SEC. Swan Global Investments offers and manages the Defined Risk Strategy for investors including individuals, institutions and other investment advisor firms. All Swan products utilize the Swan DRS but may vary by asset class, regulatory offering type, etc. Accordingly, all Swan DRS  product  offerings  will  have  different  performance  results  and  comparing  results among the Swan products and composites may be of limited use. Swan claims compliance with the Global Investment Performance Standards (GIPS®). Any historical numbers, awards and recognitions presented are based on the performance of a (GIPS®) composite, Swan’s DRS Select Composite, which includes nonqualified discretionary accounts invested in since inception, July 1997 and are net of fees and expenses. All data used herein; including the statistical information, verification and performance reports are available upon request. The benchmarks used for the DRS Select Composite are the S&P 500 Index, which consists of approximately 500 large cap stocks often used as a proxy for the overall U.S. equity market, and a 60/40 blended composite, weighted 60% in the aforementioned S&P 500 Index and 40% in the Barclays US Aggregate Bond Index. The 60/40 is rebalanced monthly. The Barclays US Aggregate Bond Index is a broad-based flagship benchmark that measures the investment grade, US dollar-denominated, fixed-rate taxable bond market. The index includes Treasuries, government-related and corporate securities, MBS (agency fixed-rate and hybrid ARM pass-throughs), ABS and CMBS (agency and non-agency). Indexes are unmanaged and have no fees or expenses. An investment cannot be made directly in an index. Swan’s investments may consist of securities which vary significantly from those in the benchmark indexes listed above and performance calculation methods may not be entirely comparable. Accordingly, comparing results shown to those of such indexes may be of limited use. The advisor’s dependence on its DRS process and judgments about the attractiveness, value and potential appreciation of particular ETFs and options in which the advisor invests or writes may prove to be incorrect and may not produce the desired results. There is no guarantee any investment or the DRS will meet its objectives. All investments involve the risk of potential investment losses as well as the potential for investment gains. Prior performance is not a guarantee of future results and there can be no assurance, and investors should not assume, that future performance will be comparable to past performance. Further information is available upon request by contacting the company directly at 970.382.8901 or visit www.swanglobalinvestments.com. 127-SGI-032720