Conventional wisdom dictates that investors shouldn’t put all their eggs in one basket.  Diversification is sound advice and good risk management.  However, there are certainly individuals who for one reason or another have a large portion of their wealth in a single stock that creates a range of risks and necessitates investment decisions. Portfolio overlays can serve a range of objectives and help investors with concentrated stock positions structure a desired outcome.

What will be covered?

What is a Concentrated Stock Position?

In brief, a concentrated stock position is any large accumulation of stock in one company, or an ETF for that matter, relative to the investor’s total wealth. Any time a large portion of an investor’s capital is tied up in one holding it presents risks to the overall portfolio as well as the investor’s long-term plan. The risks include diversification risk, tax consequences, and liquidity. Meanwhile, the investor may have one or more objectives for the shares and their inherent value over time, such as risk management, income, strategic exit, and/or charitable intentions.

While there is no widely-accepted definition of a concentrated position, at Swan Global Investments, we consider a concentrated stock position as any investment in one stock that represents 15%, or more, of the investor’s total investable assets.

In such cases, the investor might have 50%, 75%, or possibly even 90% of their wealth tied up in a single company.  While it is likely that such an investor would be a high net worth individual, having too much of one’s wealth in a single holding exposes that investor to a large degree of stock-specific risk.

Diversification might not always be possible in these situations.  The investor might be reluctant to or prohibited from selling out of the stock and diversifying for any number of reasons, including:

Such situations are not uncommon.  A financial advisor might conclude this his or her “hands are tied” when it comes to consulting on a large portion of their client’s wealth.

Fortunately, the financial advisor and the high-net-worth investor do have options – literally.  In addition to establishing trusts for philanthropic and tax-related objectives, and strategic plans for selling such positions, the options market allows advisors to achieve a wide range of goals without violating the liquidity restrictions sometimes present in concentrated stock situations.  Different combinations of call options and put options can be applied to a concentrated equity position to achieve different goals.

What are Portfolio Overlays?

The most difficult step in the process is determining what the goal of the investors might be.  Once those goals are defined, one can begin designing and implementing an option-based strategy.

A portfolio overlay is a comprehensive investment solution in the form of an independent options-based strategy that sits on top of a fully invested portfolio. Portfolio overlays are designed to help investors manage risk or reduce volatility, structure an outcome over a defined period, or generate additional income to optimize total portfolio return.

Portfolio overlays are attractive to investors not only because they may help create more desired investment outcomes, but they also tend to be highly capital efficient: One investment creates two return steams.  In other words, once the overlay strategy is properly designed and implemented, the total return is generated by both the return of underlying portfolio or holdings combined with the returns from the overlay strategy.

Overlays can be executed on a portfolio of holdings, an index or sector-based ETF, or a concentrated individual stock position.

As experts in options-based strategies and portfolio overlays, we can help investors with concentrated positions intelligently manage the associated risks and objectives with the goal of incorporating that large position into a well-diversified portfolio and overall financial plan.

Below are four potential use cases where options might help an investor achieve their goals, without having to liquidate their stock position.

The biggest risk to an investor with very large positions in a single stock is the risk of that stock crashing.  Cataclysmic selloffs in the broad market aren’t frequent, but individual companies are much more likely to experience such ruinous losses.  Put options can be used to mitigate downside risks.  There are many ways to use put options, whether singularly or in tandem with other options contracts to create strategies or structures that can provide hedging benefits. There is a cost to hedging, either in outright expense or in the form of foregoing upside.

Low-Cost hedging or “zero-cost” hedging strategies have become popular as a means of mitigating risk and managing the cost of hedging over time. Here is an example of a popular options structure for low-cost hedging, the put spread collar: 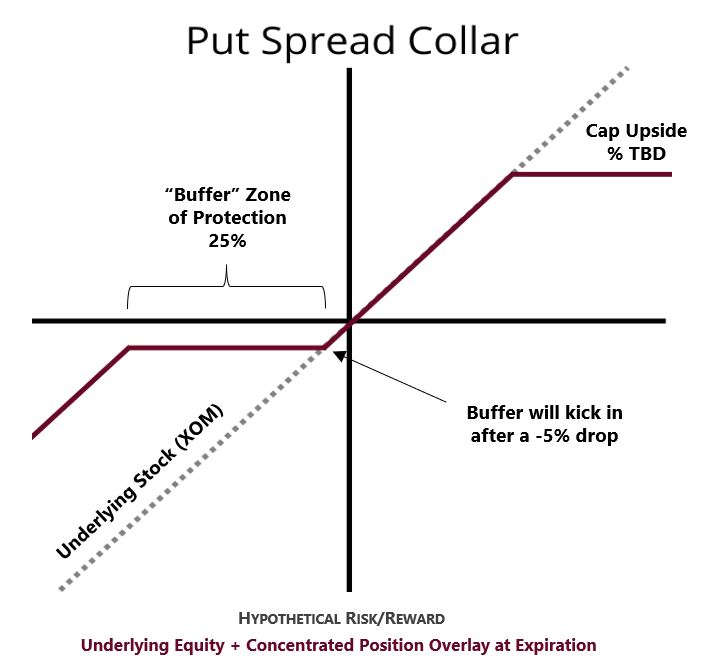 Some investors rely on “mailbox money”- i.e. the dividends produced by a stock or the yield generated by bonds.  Stock dividends create a tax liability, which can be substantial for large holdings. With bond yields at historic lows since the Global Financial Crisis of 2007-09, generating cash from fixed income isn’t easy.  Investors with large, concentrated stock positions may want to create some other way to pay that tax bill, rather than pulling from other sources of income of selling assets. Or investors may seek a way to turn a concentrated position in a stock that pays little to no dividends into an income-generating holding.  Income-generating option overlay strategies might be a solution to these problems.

Income overlays have been growing in popularity and utilization in large part due to the fact bonds have provided low yields for years. The systematic writing of call options, in a covered call strategy, can provide a premium to offset taxes or provide additional yield. 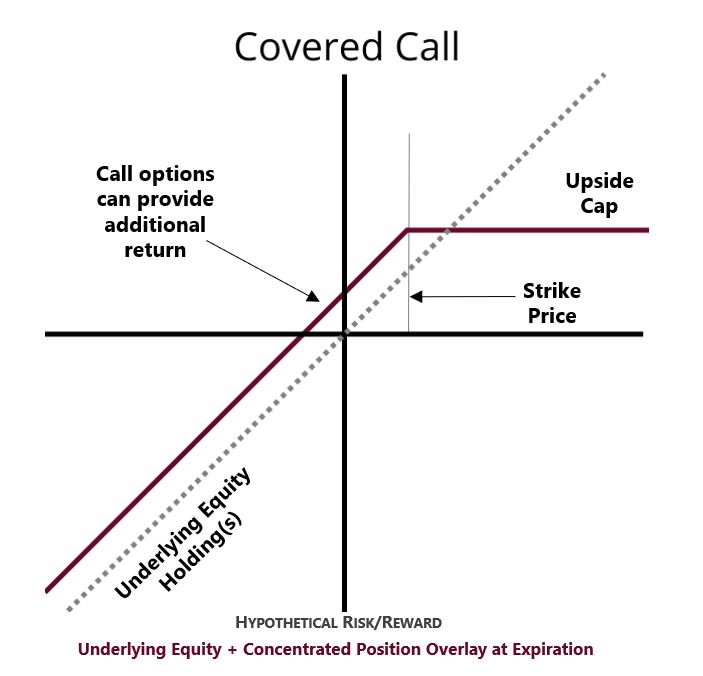 Other investors might be holding on to their concentrated equity position because they are unwilling to sell until they achieve a certain price level or profit target.  If this is the case, certain call option strategies can be employed that might get the investor to that price target more quickly and allow for a liquidation. A ratio spread is an options strategy that could be ‘overlayed’ on that underlying stock to achieve such a strategic exit. 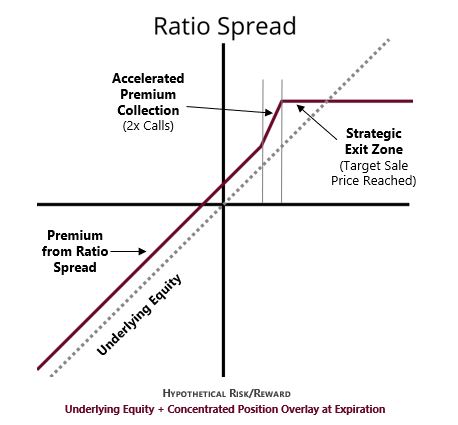 Some investors might be in the opposite position of having a large equity position, as discussed previously.  Rather than having a large portion of their wealth in a company’s stock, they might be shorting a company’s stock.  In such a situation, the risk to the investor isn’t that the stock goes down, but that the stock goes up.  When shorting stocks, losses can theoretically be endless.  To hedge against the risk of open-ended losses when shorting stocks, certain hedging strategies can be designed for upside risk, such as the put write strategy. 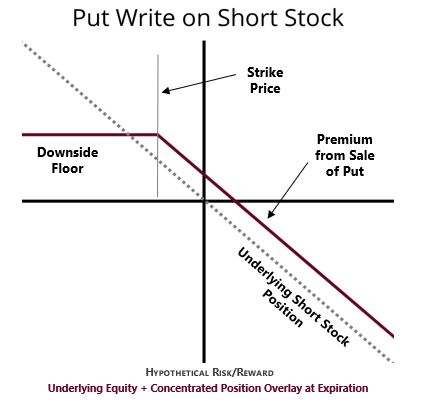 Of course, none of these strategies aren’t without risks and costs.  Before investing the financial advisor and the investor need to understand what is expected under different outcomes.  Also, there isn’t a single, magical option strategy that can accomplish all possible goals or be profitable in all scenarios.  Certain strategies are appropriate for certain goals; other goals will require different strategies.

The situations described above are often unique to the client.  The larger the client, the more unique their needs tend to be.  Cookie-cutter solutions aren’t appropriate for high net worth or ultra-high net worth individuals with much of their wealth tied up in a single stock.  Thankfully, option-based portfolio overlay strategies allow financial advisors to devise bespoke solutions for these unique situations.

Managing a concentrated stock position is a complex task that involves investment selection, execution and management, tax, and legal issues. The right financial professionals serve a vital role in navigating the maze.

Swan Global Investments has been in the options overlay business for over 25 years.  With a quarter century of experience, we can work with you in designing customized portfolio solutions.

Marc Odo, CFA®, FRM®, CAIA®, CIPM®, CFP®, Client Portfolio Manager, is responsible for helping clients and prospects gain a detailed understanding of Swan’s Defined Risk Strategy, including how it fits into an overall investment strategy. His responsibilities also include producing most of Swan’s thought leadership content. Formerly Marc was the Director of Research for 11 years at Zephyr Associates.

How to View & Measure Stock Market Volatility Learn what volatility is, how to measure stock market volatility, and how to minimize your volatility in a portfolio.
Observations & Insights Useful for Tackling the Next 25 Years | 25 Years in Hedged Equity We’ll look back over the last 25 years to provide observations and insights that may well serve investors seeking to manage risk today and for decades to come.

Swan Global Investments, LLC is a SEC registered Investment Advisor that specializes in managing money using the proprietary Defined Risk Strategy (“DRS”). SEC registration does not denote any special training or qualification conferred by the SEC. Swan offers and manages the DRS for investors including individuals, institutions and other investment advisor firms.

All Swan products utilize the Defined Risk Strategy (“DRS”), but may vary by asset class, regulatory offering type, etc. Accordingly, all Swan DRS product offerings will have different performance results due to offering differences and comparing results among the Swan products and composites may be of limited use. All data used herein; including the statistical information, verification and performance reports are available upon request. The S&P 500 Index is a market cap weighted index of 500 widely held stocks often used as a proxy for the overall U.S. equity market. The Bloomberg US Aggregate Bond Index is a broad-based flagship benchmark that measures the investment grade, US dollar-denominated, fixed-rate taxable bond market. The index includes Treasuries, government-related and corporate securities, MBS (agency fixed-rate and hybrid ARM pass-throughs), ABS and CMBS (agency and non-agency). Indexes are unmanaged and have no fees or expenses. An investment cannot be made directly in an index. Swan’s investments may consist of securities which vary significantly from those in the benchmark indexes listed above and performance calculation methods may not be entirely comparable. Accordingly, comparing results shown to those of such indexes may be of limited use. The adviser’s dependence on its DRS process and judgments about the attractiveness, value and potential appreciation of particular ETFs and options in which the adviser invests or writes may prove to be incorrect and may not produce the desired results. There is no guarantee any investment or the DRS will meet its objectives. All investments involve the risk of potential investment losses as well as the potential for investment gains. Prior performance is not a guarantee of future results and there can be no assurance, and investors should not assume, that future performance will be comparable to past performance.  Further information is available upon request by contacting the company directly at 970-382-8901 or www.swanglobalinvestments.com.